“Public interest Litigation”,is a litigation filed in a court of law, for the protection of “Public Interest” , such as pollution, Terrorism, Road safety, constructional hazards etc. Article 32 of the Indian Constitution contains the tool which directly joins the public with the judiciary. Public Interest Litigation is not mentioned in any constitution or a law of the land. It has been interpreted by judges to consider the intent of public at large.

The origin and evolution of Public Interest Litigation in India emanated from realization of constitutional obligation by the Judiciary towards the vast sections of the society – the poor and the marginalized sections of the society. Prior to 1980s the aggrieved party could personally knock the doors of justice and seek remedy for his grievance and any other person who was not personally affected could not knock the doors of justice as a proxy for the victim or the aggrieved party. In other words, only the affected parties had the locus standi (standing required in law) to file a case and continue the litigation and the non-affected persons had no locus standi to do so. And as a result, there was hardly any link between the rights guaranteed by the Constitution of Indian Union and the laws made by the legislature on the one hand and the vast majority of illiterate citizens on the other. 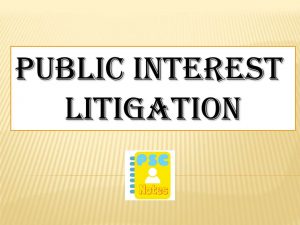 Revolution in the PIL movement was brought by the Justice P.N. Bhagawati in the case of S.P. Gupta v. Union of India. In this case it was held that “any member of the public or social action group acting bonafide” can invoke the Writ Jurisdiction of the High Courts or the Supreme Court seeking redressal against violation of a legal or constitutional rights of persons who due to social or economic or any other disability cannot approach the Court. By this judgment PIL became a potent weapon for the enforcement of “public duties” where executed in action or misdeed resulted in public injury. And as a result any citizen of India or any consumer groups or social action groups can now approach the apex court of the country seeking legal remedies in all cases where the interests of general public or a section of public are at stake.