Like its varying topography, Rajasthan has varying climate. The weather or climate of the Rajasthan can be broadly classified into four distinct seasons. They are – Pre-monsoon, which is the 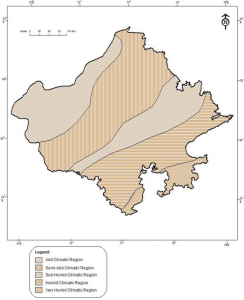 hot season preceding the monsoon and extends from April to June, the Monsoon that occurs in the month of June in the eastern region and mid- July in the western arid regions, the Post-monsoon that commences from mid-September and continues till November and the Winter that extends from December to March, January being the coldest month of the year. The average temperature in winter ranges from 8° to 28° C (46° to 82° F) and in summer the average temperature range from 25° to 46° C (77° to 115° F).

Broadly speaking, Rajasthan has a tropical desert climate. It is extremely cold from October to February while the scorching sun tortures the land from March to September. Due to scanty rainfall, women can be seen carrying water for miles to meet their daily needs during summers. To the south of Rajasthan, River Luni and River Chambal River and its tributaries bless the people with their water and form an alluvial basin in Kota.

There are distinct temperature range variations diurnal and seasonally throughout the state, revealing the most typical phenomenon of the warm-dry continental climate. The summer begins in the month of March while the temperature keeps rising progressively through April, May and June. West of Rajasthan and the eastern side of Aravalli Range, in the region of Bikaner, Phalodi, Jaisalmer and Barmer, the maximum daily temperature hovers around 40°C to 45°C. Sometimes, it even reaches as high a 49°C during the summer months. Nights of summers see a considerable temperature fall with a minimum daily temperature around 20°C to 29°C. However, Udaipur and Mount Abu, have a pleasanter climate in summers with a relatively lower daily maximum temperature that reaches 38°C and 31.5°C, respectively. The daily minimum temperature at nights for these two stations hovers around 25°C and 22°C, respectively. The major portion of the state tat consists of the arid west and the semi-arid mid-west has an average maximum of 45°C in June.

January is the coldest month in the stare of Rajasthan. The minimum temperatures sometimes fall to -2°C in the night at places like Sikar, Churu, Pilani and Bikaner. The sandy land gets even colder with occasional secondary Western winds that cross the western, northern and eastern Rajasthan during winter months, and even cause light rainfall and chilly winds can be experienced during this period. Most of the Rajasthan, except the southeast Rajasthan comprising of Kota, Bundi and Baran and western Barmer have an average temperature of more than 10°C. Due to the cold western winds, the whole of Rajasthan sometimes come under the spell of the cold wave for 2 to 5 days during winters. 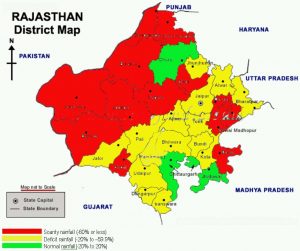 hwest monsoon begins in the last week of June in the eastern parts and may last till mid-September. There are occasionally pre-monsoon showers in mid-June while post-monsoon rains may occur in October. Winters may also receive a little rainfall with the passing of western distribution over the region. However, Rajasthan receives most of its monthly rainfall during July and August.

During the south-west monsoon period extending from June to September the state receives about 90% of the total rainfall. The cold weather period (January and February) receive the Remaining portion of rainfall which occurs in association with the local convective activity. There is a wide variation in the mean annual rainfall over Rajasthan as the extreme western parts of Jaisalmer district receive rainfall less than 100mm in contrast to more than 900mm in the eastern parts of Jhalawar and Banswara. The lowest recorded annual rainfall in the past 100 years i.e. between 1900 and 2010 was 24 mm in the western Rajasthan and whereas it was never below 120 mm in the eastern Rajasthan

The light winds are mainly from northwest-north-northeast over the state in January which gradually turn anti-clockwise replaced by light north-westerly to westerly or south-westerly winds in April. In July with the advance of the summers, the pressure gradient increases and correspondingly the winds from northwest to southwest also strengthen reaching their maximum strength. The pressure decreases from west-southwest to eastnortheast over the state, in July. Having the weakest pressure gradient the month of October is the transition period. The changeover of the pressure and wind pattern commences and north-northeasterly winds appear October onwards.

The maximum rainfall in the state is received in the Southern or SouthEastern districts of the state. On the west of Aravalli hills Pali and Jalore districts receive maximum amount of rain of 50 cm and 43 cm in West Rajasthan. In the North or North-Western districts Jaisalmer district receives the lowest rainfall. Bikaner, Ganganagar, Jaisalmer receive annual rainfall of 26cm, 24cm and 17cm respectively. The adjoining areas of these districts constitute the driest zone of the state. 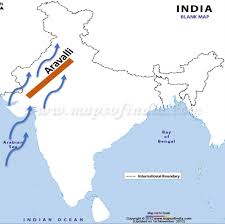 Fog occurs occasionally due to lack of sufficient moisture in the region. The maximum frequency of occurrence of fog is during December and January in both Western and Eastern Rajasthan. The favorable Conditions for occurrence of radiation fog like light to calm winds, clear skies etc. exist after the withdrawal of the monsoon till the month of February. During the monsoon season hill fog occurs at few places, when air is almost saturated and is easily cooled below the dew point while rising over high elevations.

The average temperature experienced by the state is