The state of West Bengal has an important position in mineral production of the country. In terms of value, the state accounts for 3.8% of mineral production in India and occupies the seventh position. Various metallic and non-metallic mineral deposits have been located both in the Peninsular and Extra-peninsular parts of the State and some of them viz. coal, china clay, fire clay, apatite, dolomite, limestone, silica sand, base metals, wolframite have economic importance. A detailed account of the mineral resources are as follows: 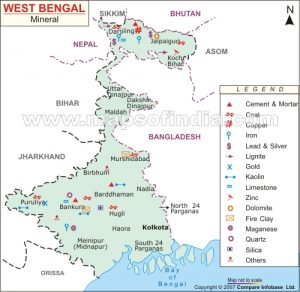 The apatite-magnetite mineralisation occurs in the southern part of the Purulia district. The important apatite occurrences are located in Beldih and Mednitanr in the western part and Chirugora, Purtaha Kutni and Dandodih-Gamardih in the eastern part.

Apatite deposit is being exploited by the West Bengal Mineral Development and Trading Corporation Ltd. (WBMDTCL) since 1975 and marketed as direct application in fertiliser industry.

Discontinuous and irregular veins of asbestos occur along the shear planes and diagonal joints within meta-dolerites, especially along their contacts with the schists and phyllites of the Singhbhum Group around Birmadal and Chirugora areas of Medinipur District.

Baryte veins occur impersistently along a 12 Km. long E-W trending belt in Purulia district extending from Malthal in the East to Ukma in the West.

It is well known that the Raniganj coalfield of West Bengal holds the earliest known coalfield of the country. During the last 10-12 years, the Birbhum coalfield has been discovered. The large potentiality of this recently discovered coalfield has already been established by the Coal Wing of Geological Survey of India. Besides these two large coalfields, there are a few minor coalfields and/or outliers of coal bearing rocks, like Darjeeling, Barjora, Hetampur and Tangsuli. Except Barjora which holds some promise, others are of academic interest at present. Till date, Raniganj coalfield is the only coal producing area of the state.

Extensive deposits of dolomite occur in the Jainti area of Jalpaiguri district. However, the entire dolomite deposits are comprised within the Buxa Tiger Reserve. Due to non-availability of forestry clearance, the exploitation of dolomite in Jainti area is completely stopped at present.

The Fireclay deposits are generally associated with the coal seams over a wide area in Raniganj coalfield of the Bardhaman district and in some areas of the coalfield of Birbhum district. Besides, some of the Chinaclay quarries of the Muhammad Bazar and Chandidaspur of Birbhum district also yields fire clay. These clay deposits are developed within the Barakar formaiton of the Gondwana Supergroup.

Discontinous bodies of Kyanite-quartz rocks are located in the district of Purulia.

Geological Survey of India has carried out preliminary investigation of the reported limestone occurrences in West Bengal since late forties. The occurrences of limestone around Kudagara, Tutu Pahar, Subarnarekha river, Dankagarha Nala, Balamu and Maramu areas of Purulia district and Harirampur and Salaipahari areas of Bankura district were also investigated in detail by surface exploration.

Bedded limestones occurring within the Lower Panchets of the Gondwana are found near Baghmara, NW of Panchet Hill; to the south of the Raniganj coalfield. The limestone and dolomite deposits around Harirampur-Salai Pahari area located near the boundary between Purulia and Bankura districts. In Darjeeling district, a few scattered occurrences of coarse, crystalline limestone have been reported from Pall in Phenock stream and Bindi stream. A few limestone bands overlying coal bearing formation are reported from Lish River.

Huge reserve of sands are available from the beds of many rivers in the western and northern part of the State. Most river sands are impure and may be used for producing inferior quality glass. However, the sands of the Damodar and Ajoy rivers are on great demand for stowing in the coal mines of the Raniganj Coalfield.

Occurrences of ochres, bluish grey and yellow mottled clays are found in association with lateritised sandstones and grits of Durgapur beds in the eastern part of Raniganj coalfields in Bardhaman district. Ochre deposits are also found in Medinipur and Purulia districts.

Moulding sand, as they occur in nature, are fine to medium grained sand and contain an appreciable amount of clay which act as bonding material. Some of the moulding sand occurences of this State have been found suitable by the National Metallurgical Laboratory, Haora, for use in iron and non-ferrous foundries. Moulding sand deposits are mainly available in Bardhaman and Bankura districts.

Good quality glass sands are rather scarce in the State. They are mostly impure, mixed with iron oxides and suitable for coloured glasses. In Bankura district, fairly large occurrences of quartzite of the Proterozoic are available which may be suitable for its utilisation in the glass industry. In Bardhaman district, occurences of sandstone of the Gondwana Supergroup are reported from Mohanpur. The sandstone after calcination may turn out suitable for use in glass industry. In Purulia district, milky-white quartz veins within the Proterozoic rocks occur in Mirmi, Brindabanpur and Inchadih areas.

The occurrences of Wolframite are located in Chhendapathar and Porapahar areas of Bankura district. Occurrences of wolframite and scheelite have also been reported from Mansang area of Darjeeling district.

An occurrence of Arsenopyrite has been recorded on the northern flank of Sampthar hill, Darjeeling district.

Pale green hexagonal crystals of Beryl have been reported from Sulung Lohar and Belamu hill of Purulia district.

Dark blue stumpy Corundum crystals, varying in size from a fraction of a centimetre to about 2.5 cm. in diameter are occurring within the mica schist in Salbone, Paharpur and Bhagabandh areas of Purulia district.

The occurrences of Fluorites within pegmatites have been reported from Suling Lohar, east of Maramou and southern flank of Belamu hill of Purulia district.

Show of placer Gold is present in the streams/rivers flowing through the Proterozoic volcanosedimentary pile of rocks in Purulia, Bankura and Medinipur districts.

In Purulia district, titaniferous Iron Ores occur in pegmatites and quartz veins around Manbazar, Gaurangdih, Tiluri and Jhalda. In Bankura district, magnetite ore occur as interlaminated bands within quartzite and gneisses, varying thickness from 7cm to 1m and extending for 24 km in length.

Lateritoid Manganese occur in the form of thin bands, lenses, lenticles, concretions etc. and a variety of collform structures in the schits and quartzites of Singhbhum Group.

Occurrences of small books of Ruby Mica and also ordinary mica, varying in size from 2.5 sq. cm. to 20.5 sq. cm. have been reported from Adabana, Bhursa, Kumargarh in Purulia district and Kaduria, Pirrabani area of Bankura district.

Occurrences of Pyrite is found with other sulphide within graphite bearing mica schist of the Chhotanagpur Gneissic Complex in Karcha and Talmu areas of Purulia district.

Study of Chhotanagpur Gneissic Complex (CGC) along selected sectors in West Bengal by second generation mapping revealed an association of ‘bastnaesite’, allanite and barite within an abandoned pegmatite quarry near Nawahatu, Purulia district.

Interesting occurrences of pollucite, the only ore of caesium within pegmatite veins adjacent to calc-silicate rock near Beku lying to the north of NPSZ has been reported recently.

Detail examination and scanning of areas spread over more than 1000 sq. km. and appeared to be geologically and geomorphologically suitable, results in identification and delineation of twenty-five possible prospects.

Ilmenite and Rutile bearing quartz and pegmatite veins have been found in a number of localities within a radius of about 10 km of Gaurangdih in Purulia district. Ilmenite also occurs in pegmatite and quartz veins near Manbazar and Jhalda area of Purulia district.