Buddhism is a world religion and is based on the teachings of Siddhartha Gautama, who is known as the Buddha (literally the Enlightened One or Awakened One). Siddhārtha Gautama was the historical founder of Buddhism. After asceticism and meditation, he discovered the Buddhist Middle Way—a path of moderation away from the extremes of self-indulgence and self-mortification. Early texts suggest that Gautama was not familiar with the dominant religious teachings of his time until he left on his religious quest, which is said to have been motivated by existential concern for the human condition.

Siddhartha was born in a royal Hindu Kshatriya family. The Buddha’s father was King Śuddhodana, the leader of Shakya clan, whose capital was Kapilavastu, Uttar Pradesh. Queen Maya, his mother, on her way to her father’s kingdom gave birth to her son at Lumbini, Nepal, in a garden beneath a sal tree. The infant was given the name 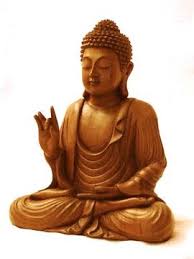 Siddhartha (Pāli: Siddhattha), meaning “he who achieves his aim”. During the birth celebrations, the hermit seer Asita journeyed from his mountain abode and announced that the child would either become a great king (chakravartin) or a great holy man.

When he reached the age of 16, his father arranged his marriage to a cousin Yaśodharā They had a son, named Rahul. Siddhartha is then said to have spent 29 years as a prince in Kapilavastu. Although his father ensured that Siddhartha was provided with everything he could want or need, Buddhist scriptures say that the future Buddha felt that material wealth was not life’s ultimate goal.

At the age of 29, Siddhartha left his palace to meet his subjects. Despite his father’s efforts to hide from him the sick, aged and suffering, Siddhartha was said to have seen an old man. When his charioteer Channa explained to him that all people grew old, the prince went on further trips beyond the palace. On these he encountered a diseased man, a decaying corpse, and an ascetic. These depressed him, and he initially strove to overcome ageing, sickness, and death by living the life of an ascetic and hence left his princely abode for the life of a mendicant.

Gautama initially went to Rajagaha and began his ascetic life by begging for alms in the street. After King Bimbisara’s men recognised Siddhartha and the king learned of his quest, Bimisara offered Siddhartha the throne. Siddhartha rejected the offer, but promised to visit his kingdom of Magadha first, upon attaining enlightenment. He left Rajagaha and practised under two hermit teachers. After mastering the teachings of Alara Kalama (Skr. Ārāda Kālāma), he was asked by Kalama to succeed him.

Siddhartha and a group of five companions led by Kaundinya are then said to have set out to take their austerities even further. They tried to find enlightenment through deprivation of worldly goods, including food, practicing self-mortification. After nearly starving himself to death by restricting his food intake to around a leaf or nut per day, he collapsed in a river while bathing and almost drowned. Siddhartha began to reconsider his path. Then, he remembered a moment in childhood in which he had been watching his father start the season’s plowing. He attained a concentrated and focused state that was blissful and refreshing, the jhāna.

According to the early Buddhist texts, after realizing that meditative jhana was the right path to awakening, but that extreme asceticism didn’t work, Gautama discovered what Buddhists call the Middle Way—a path of moderation away from the extremes of self-indulgence and self-mortification.

Gautama was famously seated under a banyan tree – now known as the Bodhi tree – in Bodh Gaya, India, when he vowed never to arise until he had found the truth. Kaundinya and four other companions, believing that he had abandoned his search and become undisciplined, left. After a reputed 49 days of meditation, he is said to have attained Enlightenment. From that time, Gautama was known to his followers as the Buddha or “Awakened One” (“Buddha” is also sometimes translated as “The Enlightened One”). He is often referred to in Buddhism as Shakyamuni Buddha, or “The Awakened One of the Shakya Clan.”

According to Buddhism, at the time of his awakening he realized complete insight into the cause of suffering, and the steps necessary to eliminate it. These discoveries became known as the “Four Noble Truths”, which are at the heart of Buddhist teaching. Through mastery of these truths, a state of supreme liberation, or Nirvana, is believed to be possible for any being. The Buddha described Nirvāna as the perfect peace of a mind that’s free from ignorance, greed, hatred and other afflictive states, or “defilements” (kilesas). Nirvana is also regarded as the “end of the world”, in that no personal identity or boundaries of the mind remain. In such a state, a being is said to possess the Ten Characteristics, belonging to every Buddha.

After his awakening, the Buddha met two merchants, named Tapussa and Bhallika, who became his first lay disciples. The Buddha intended to visit Asita, and his former teachers, Alara Kalama and Uddaka Ramaputta, to explain his findings, but they had already died. He then travelled to the Deer Park near Vārānasī (Benares) in northern India, where he set in motion what Buddhists call the Wheel of Dharma by delivering his first sermon to the five companions with whom he had sought enlightenment. Together with him, they formed the first Sangha: the company of Buddhist monks. All five become Arahants, and within the first two months, with the conversion of Yasa and fifty four of his friends, the number of such Arahants is said to have grown to 60. The conversion of three brothers named Kassapa followed, with their reputed 200, 300 and 500 disciples, respectively. This swelled the Sangha to more than 1000.

For the remaining years of his life, the Buddha is said to have travelled in the Gangetic Plain, in Uttar Pradesh, Bihar and southern Nepal, teaching a diverse range of people: from nobles to outcaste street sweepers, murderers such as Angulimala, and cannibals such as Alavaka. From the outset, Buddhism was equally open to all races and classes, and had no caste structure. The Sangha traveled through the subcontinent, expounding the Dharma. This continued throughout the year, except during the four months of the Vassana rainy season when ascetics of all religions rarely travelled. One reason was that it was more difficult to do so without causing harm to animal life. At this time of year, the Sangha would retreat to monasteries, public parks or forests, where people would come to them.

The first Vassana was spent at Varanasi when the Sangha was formed. After this, the Buddha kept a promise to travel to Rajagaha, capital of Magadha, to visit King Bimbisara. During this visit, Sariputta and Maudgalyayana were converted by Assaji, one of the first five disciples, after which they were to become the Buddha’s two foremost followers. The Buddha spent the next three seasons at Veluvana Bamboo Grove monastery in Rajagaha, capital of Magadha.

Upon hearing of his son’s awakening, King Suddhodana sent, over a period of time, ten delegations to ask him to return to Kapilavastu. On the first nine occasions, the delegates failed to deliver the message, and instead joined the Sangha to become Arahants. The tenth delegation, led by Kaludayi, a childhood friend of Gautama’s (who also became an Arahant), however, delivered the message.

Two years after his awakening, the Buddha agreed to return, and made a two-month journey by foot to Kapilavastu, teaching the Dharma as he went. Buddhist texts say that King Suddhodana invited the Sangha into the palace for a meal, followed by a Dharma talk. After this he is said to have become a Sotapanna. During the visit, many members of the royal family joined the Sangha. The Buddha’s cousins Ananda and Anuruddha became two of his five chief disciples. At the age of seven, his son Rahul also joined, and became one of his ten chief disciples. His half-brother Nanda also joined and became an Arahant.

Of the Buddha’s disciples , Sariputta , Maudgalyayana , Mahakasyapa, Ananda and Anuruddha are believed to have been the five closest to him. His ten foremost disciples were reputedly completed by the quintet of Upali, Subhoti, Rahula, Mahakaccana and Punna. In the fifth Vassana, the Buddha was staying at Mahavana near Vesali when he heard news of the impending death of his father. He is said to have gone to King Suddhodana and taught the Dharma, after which his father became an Arahant.

The king’s death and cremation was to inspire the creation of an order of nuns. Buddhist texts record that the Buddha was reluctant to ordain women. His foster mother Maha Pajapati, for example, approached him, asking to join the Sangha, but he refused. Maha Pajapati, however, was so intent on the path of awakening that she led a group of royal Sakyan and Koliyan ladies, which followed the Sangha on a long journey to Rajagaha. In time, after Ananda championed their cause, the Buddha is said to have reconsidered and, five years after the formation of the Sangha, agreed to the ordination of women as nuns. He reasoned that males and females had an equal capacity for awakening. But he gave women additional rules (Vinaya) to follow.

Buddha found patronage in the ruler of Magadha, emperor Bimbisara. The emperor accepted Buddhism as personal faith and allowed the establishment of many Buddhist “Viharas.” This eventually led to the renaming of the entire region as Bihar.

The Maurya empire reached its peak at the time of Emperor Asoka, who himself converted to Buddhism after the Battle of Kalinga. This heralded a long period of stability under the Buddhist emperor. The power of the empire was vast – ambassadors were sent to other countries to propagate Buddhism. The Buddha did not appoint any successor and asked his followers to work for personal salvation. The teachings of the Buddha existed only in oral traditions. The Sangha held a number of Buddhist councils in order to reach consensus on matters of Buddhist doctrine and practice. Buddha attained Parinirvana in the abandoned jungles of Kuśināra, modern Kushinagar in Uttar Pradesh.