The term biodiversity was coined as a contraction of biological diversity by E.O. Wilson in 1985. Biodiversity may be defined as the variety and variability of living organisms and the ecological complexes in which they exist. In other words, biodiversity is the occurrence of different types of ecosystems, different species of organisms with the whole range of their variants and genes adapted to different climates, environments along with their interactions and processes.

It describes the variation in the number and types of genes as well as chromosomes present in different species. The magnitude of variation in genes of a species increases with increase in size and environmental parameters of the habitat.  The genetic variation arises by gene and chromosome mutation in individuals and in sexually reproducing organisms and it is spread in the population by recombination of genetic materials during cell division after sexual reproduction.

It describes the variety in the number and richness of the spices with in a region. The species richness may be defined as the number of species per unit area. The richness of a species tells about the extent of biodiversity of a site and provides a means for comparing different sites.  The species richness depends largely on climatic conditions. The number of individuals of different species with in a region represents species evenness or species equitability. The product species richness and species evenness give species diversity of a region. When a species is confined entirely to a particular area, it is termed as endemic species.

It describes the assemblage and Interaction of spices living together and the physical environment a given area. It relates varieties of habitats, biotic communities ecological processes in biosphere. It also tells about the diversity within the ecosystem. It is referred as Land escape diversity because it includes placement and size of various ecosystems.  For example, the landscapes like grass lands, deserts, mountains etc. show ecosystem diversity. The ecosystem diversity is due to diversity of niches, trophic levels and ecological processes like nutrient cycling, food webs, energy flow, role of dominant species and various related biotic interactions. Such type of diversity can generate more productive and stable ecosystems or communities capable of tolerating various types of stresses e.g. drought, flood etc.

The biodiversity has the following importance’s:

The consumptive value can be assigned to goods such as fuel woods, leaves, forest products etc. which may be consumed locally and do not figure in national and international market.

The loss of biodiversity directly influences the social life of the country possibly through influencing ecosystem functions (energy flow and biogeochemical cycle). This be easily understood by observing detrimental effects of global warming and acid rain which cause an unfavorable alteration in logical processes.

Aesthetic values such as refreshing fragrance of the flowers, taste of berries, softness of mossed, melodious songs of birds, etc. compel the human beings to preserve them. The earth’s natural beauty with its colour and hues, thick forest, and graceful beasts has inspired the human beings from their date of birth to take necessary steps for its maintenance. Similarly botanical and zoological gardens are the means of biodiversity conservation and are of aesthetic values.

Biodiversity holds great ecological value because it is indispensable to maintain the ecological balance. Any disturbance in the delicately fabricated ecological balance maintained by different organisms, will lead to severe problems, which may threaten the survival of human beings.

A biodiversity hotspot is a biogeographic region that is both a significant reservoir of biodiversity and is threatened with destruction.

The Western Ghats, also known as the Sahyadri Hills , is a mountain chain running from the north to the South and is isolated by the Arabian Sea to the West, the arid Deccan Plateau to the East, and the Vindhya-Satpura ranges to the North. They have different vegetation types: scrub jungles and grasslands at low altitudes, dry and moist deciduous forests, montane grasslands and shoals, and the precious tropical evergreen and semi evergreen forests. Complex topography, high rainfall and relative inaccessibility have helped the region retain its biodiversity. Of the 15,000 flowering plant species in India, there are an estimated 4,780 species in the Western Ghats region. There is also a great diversity of traditional crop plants and an equal diversity of animal life. A large number of amphibians, freshwater fishes and invertebrate groups are endemic to Western Ghats.

The hotspot contains the Lower Mekong catchment. It begins in eastern Bangladesh and then extends across north-eastern India, south of the Bramaputra River, to encompass nearly all of Myanmar, part of southern and western Yunnan Province in China, all of the Lao People’s Democratic Republic, Cambodia and Vietnam, the vast majority of Thailand and a small part of Peninsular Malaysia. In addition, the hotspot covers the coastal lowlands of southern China (in southern Guangxi and Guangdong), as well as several offshore islands, such as Hainan Island (of China) in the South China Sea and the Andaman Islands (of India) in the Andaman Sea. The hotspot contains the Lower Mekong catchment.

Biodiversity is considered as a reservoir of resources to be used for the manufacture of food, medicine, industrial products, etc. But with an increased demand of rapid population growth, biodiversity is gradually depleting.

The primary cause of loss of biodiversity is habitat loss or destruction which is resulted due to the large industrial and commercial activities associated with agriculture, irrigation, construction of dams, mining, fishing etc.

With increased population, the habitats are fragmented into pieces by roads, fields, canals, power lines, towns etc. The isolated fragment of habitats restricts the potential of species for dispersal and colonization. In addition, the habitat fragmentation also brings about microclimatic changes in light, temperature, wind etc.

The natural resources are over exploited to meet growing rural poverty, intensive technological growth and globalization of economy. All these factors together may be responsible for the extinction of a number of species.

Since the human beings are enjoying all the benefits from biodiversity, they should take proper care for the preservation of biodiversity in all its form and good health for the future generation i.e., the human being should prevent the degradation and destruction of the habitats thereby maintaining the biodiversity at its optimum level.

Conservation of biodiversity is protection, upliftment and scientific management of biodiversity so as to maintain it at its threshold level and derive sustainable benefits for the present and future generation. In other words, conservation of bio-diversity is the proper management of the biosphere by human beings in such a way that it gives maximum benefits for the present generation and also develops its potential so as to meet the needs of the future generations.

Wild life and Ecotourism of Rajasthan 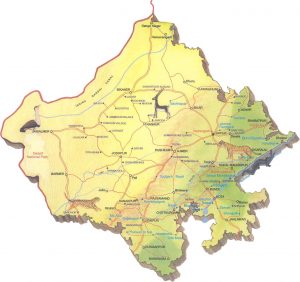 Sanctuary is an area which is of adequate ecological, faunal, floral, geomorphological, natural or zoological significance. The Sanctuary is declared for the purpose of protecting, propagating or developing wildlife or its environment. Certain rights of people living inside the Sanctuary could be permitted.

A sanctuary is a protected area which is reserved for the conservation of only animal and human activities like harvesting of timber, collecting minor forest products and private ownership rights are allowed as long as they do not interfere with well-being of animals.

National park is an area which is strictly reserved for the betterment of the wildlife & biodiversity, and where activities like developmental, forestry, poaching, hunting and grazing on cultivation are not permitted. In these parks, even private ownership rights are not allowed. Their boundaries are well marked and circumscribed. They are usually small reserves spreading in an area of 100 sq. km. to 500 sq. km. In national parks, the emphasis is on the preservation of a single floral or faunal species.

Darrah was declared a (Protected area) wildlife sanctuary in 1955, and visitors now require to seek permission from the local forest ranger to visit the park. The total area of the sanctuary is about 250 km2.

The park got the nod from National Tiger Conservation Authority (NTCA) in 2013 and the state (Rajasthan) bagged its third tiger reserve in the form of the Mukundra Hills Tiger Reserve. But now perhaps it is the one of its kind without a tiger in it.

The name Darrah is taken as the ‘pass’ in the local language revealing the purpose that the region served earlier. The Marathas, Rajput’s and the British utilized the opportune position of the forest to seek asylum during war.

The Desert protected sanctuary was declared as a National park in 1980. Total area of the National park is about 3162 km2. The desert is a harsh place to sustain life and thus most of the fauna and flora live on the edge.

The great Indian Bustard is a magnificent bird and can be seen in considerably good numbers in this park. It migrates locally in different seasons.

Keoladeo Ghana National Park famous for housing of birds, and was created around 250 years ago. The name Keoladeo has been derived from a nearby ancient Hindu temple, devoted to Lord Shiva (Maharaja Suraj Mal).

Keoladeo Ghana National Park was announced as a Ramsar site under the Wetland Convention in October 1981.

Keoladeo was designated a World Heritage Site under the world Heritage Convention in 1985 by UNESCO. It is a reserve forest under the Rajasthan Forest Act, 1953 and therefore, is the property of the State of Rajasthan of the Indian Union.

Ranthambore is a beautiful place, located in the Sawai Madhopur district of the state of Rajasthan. Ranthambore National Park is one of the largest national parks in northern India.

Ranthambore was (Sawai Madhopur Game Sanctuary in 1955) declared a wildlife sanctuary in 1957, and came under the “Project Tiger“ as a Tiger reserves in 1973-74. The total area of the sanctuary is about 400 km2.

Ranthambore National Park is famous for its tigers and is one of the best places in the country to see these majestic tigers.

The landscape of Sariska comprises of hills and narrow valleys of the Aravalli hill range.

Supreme Court of India ban on mining in the area of Sariska National park, in 1991. Sariska is the first tiger reserve in the world to have successfully relocated tigers.