Israel, officially State of Israel, in the Middle East, located at the eastern end of the Mediterranean Sea. It is bounded to the north by Lebanon, to the northeast by Syria, to the east and southeast by Jordan, to the southwest by Egypt, and to the west by the Mediterranean Sea. Jerusalem is the seat of government and the proclaimed capital, although the latter status has not received wide international recognition. 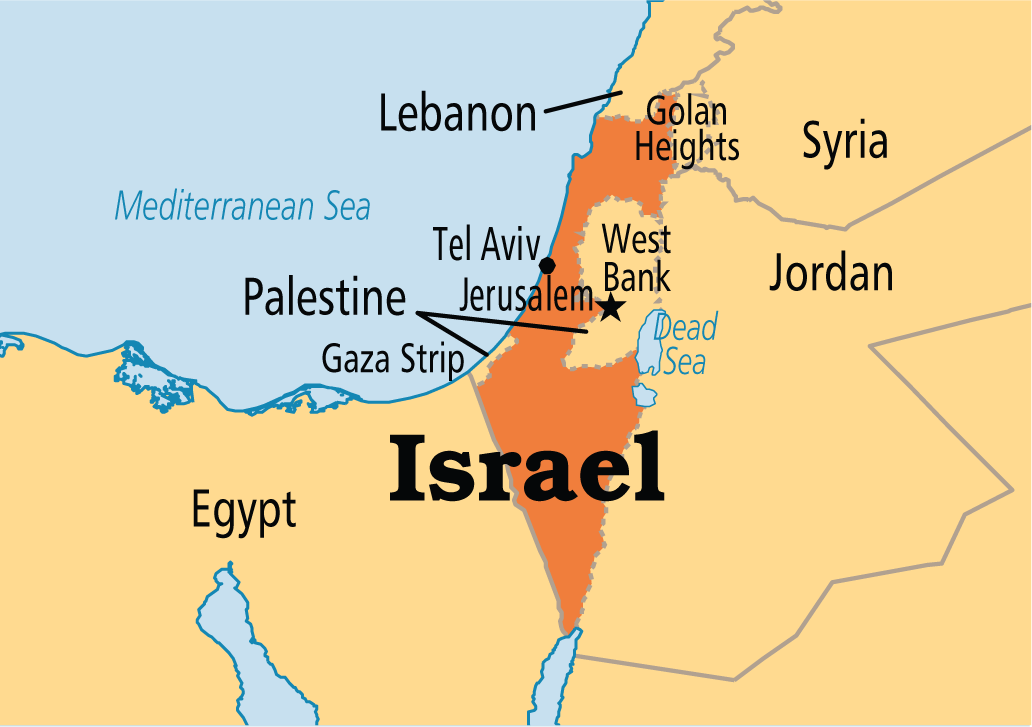 Israel is a small country with a relatively diverse topography, consisting of a lengthy coastal plain, highlands in the north and central regions, and the Negevdesert in the south. Running the length of the country from north to south along its eastern border is the northern terminus of the Great Rift Valley.

The Israel-Palestine conflict – often referred as the ‘world’s most intractable conflict’ – is rooted in a dispute over land claimed by Jews as their biblical birthright and by the Palestinians, who seek self-determination. Despite repeated attempts to end the conflict between the two countries, there is no peace settlement in sight.

They were given a large part of Palestine, which they considered their traditional home but the Arabs who already lived there and in neighbouring countries felt that was unfair and didn’t accept the new country.

In 1948, the two sides went to war. When it ended, Gaza was controlled by Egypt and another area, the West Bank, by Jordan. They contained thousands of Palestinians who fled what was now the new Jewish home, Israel.

But then, in 1967, after another war, Israel occupied these Palestinian areas and Israeli troops stayed there for years. Israelis hoped they might exchange the land they won for Arab countries recognising Israel’s right to exist and an end to the fighting.

Israel finally left Gaza in 2005 but soon after, a group called Hamas won elections and took control there. Much of the world calls Hamas a terrorist organisation. It refuses to recognise Israel as a country and wants Palestinians to be able to return to their old home – and will use violence to achieve its aims.

Since then, Israel has held Gaza under a blockade, which means it controls its borders and limits who can get in and out.

During the 1948 and 1967 wars hundreds of thousands of Palestinians left, or were forced out of, their homes and moved to neighbouring countries to become refugees.

More than 4.6 million Palestinians are refugees and their descendants, many living in camps in the West Bank, Gaza Strip, Syria, Jordan and Lebanon. They get help from the United Nations.

Other countries, particularly America, have worked hard to settle the fighting between the Arabs and Israelis but so far nothing has worked. Many people want Gaza and the West Bank to be turned into a new country – Palestine. Israel won’t agree to this unless it feels safe – and Hamas accepts its right to exist. The other sticking points are what will happen to Israelis who’ve settled in the West Bank, who will run Jerusalem and what will happen to the Palestinian refugees.

Mahatma Gandhi had clearly spelled out that though he was sympathetic to the Jews and was aware of their persecutions, he was not in favour of a forced settlement between Israel and Palestine, which was already home to the Arabs.

India’s first Prime Minister Jawaharlal Nehru held the same belief and followed the line taken by Mahatma Gandhi in saying no to Israel if it was not with the permission of the Arabs of Palestine. He even refused Albert Einstein’s appeal to vote in favour of the partition of Palestine, an event that later led to formation of Israel on May 14, 1948. Other factors, too, weighed heavily on Nehru’s mind when he said no to Einstein and when India voted against the United Nations General Assembly’s (UNGA) resolution on partition of Palestine on November 29 1947.

India formally recognised Israel post independence in September 1950. However its Israel policy was driven by the principled stand of solidarity with the Palestinian cause and India’s international approach on issues as aligned with its domestic needs. Nehru had mentioned this in his reply to Einstein that national leaders needed to be selfish to see the interest of their countries first when it came to geopolitics. So India continued with its pro-Palestine policy in line with its principled stand and the sentiments of its large Muslim population, coupled with the fact that more and more Indians were heading to the Gulf nations and it was fast emerging as a major source of remittances.

In addition, India was also dependent on the Arab nations for oil supply to meet its energy needs. Emergence of the Non-Aligned Movement (NAM) in 1950s, of which Nehru was a founding member, further drove India away from taking any pro-Israel stand openly. NAM had its origin in the Cold War which had divided the world in two blocks, pro-USSR and pro-USA.

The 1962 India China war was the first occasion when when Nehru wrote to Israeli Prime Minister David Ben Gurion for shipments of arms and ammunition. Nehru had requested Ben Gurion to ship weapons without the Israeli flag as it could have adversely affected India’s ties with the Arab nations. Though expressing sympathy and solidarity with India, Ben Gurion refused help. Israel sent shipments to India only when India said it would accept them with the Israeli flag. And that is when when Israel and India started communicating at strategic levels.

The 1971 war between India and Pakistan that led to formation of Bangladesh was the next significant step in taking forward India-Israel strategic cooperation. Srinath Raghavan’s book 1971, quoting Prime Minister Indira Gandhi’s adviser PN Haksar, says even if Israel was not in a position to supply arms to India, its Prime Minister Golda Meir diverted the shipment meant for Iran to India. Israel also provided India with intelligence support.

It was in 1992 when India finally established full diplomatic relations with Israel but only after taking Palestinian President Yasser Arafat on board. Arafat was in Delhi and after meeting Prime Minister Narasimha Rao, he announced that establishing embassies and maintaining diplomatic ties were India’s sovereign decisions and he respected it. There were two reasons behind it.

The first was the peace process between Israel and Palestine was in an advanced state at that time. State of Israel and Arafat’s Palestine Liberation Organization (PLO) recognized each other for the first time with the US mediated Oslo Accord signed in Washington in 1993.

The second was the pressure from United States. The version in bureaucratic circles is as India needed now a global interface for its economy after it decided to follow economic liberalization in 1991 as well as new markets for to meets its defence needs after the USSR collapse, its main defence supplier, it found America as the obvious choice. But in return, America asked India to accommodate Israel in its foreign policy.

India’s second series of nuclear tests in 1998 saw the US and other western countries imposing sanctions. However, it didn’t affect India much as Israel filled the gap effectively delivering the US arms as it had close military ties .

The 1999 Kargil war was a leap in terms of India-Israel military cooperation. Israel provided India with mortar ammunitions, surveillance drones and laser guided missiles along with intelligence inputs that helped in winding up the war with a befitting reply to Pakistan.

In 2003, Ariel Sharon became the first Israeli Prime Minister to visit India. Strengthening the bilateral ties, the Delhi Statement of Friendship and Cooperation was signed

Though ministerial and other bilateral visits between India and Israel continued unabated all this while, it is said that the Manmohan Singh led UPA government was not in favour of speaking much about India-Israel defence and strategic ties and rather focused on agriculture, science and technology for mutual areas of cooperation.

The Indo-Israel relations underwent hiccups when India voted against United States’ decision to make Jerusalem the capital of Israel, but it seems both the countries are over the past as they signed nine agreements including on Homeopathy and Cybersecurity to take forward the trade ties beyond diamond and defence.

The nine agreements signed between the two countries will take Indo-Isreal trade ties beyond diamond and defence as proposed by Israel in 2007. Israel had proposed negotiations on a free trade agreement with India, which was accepted by India in 2010 then Prime Minister Manmohan Singh. Since the establishment of diplomatic relations between India and Israel in 1992, trade ties have comprised primarily of diamonds.

While India’s exports to Israel in areas other than diamonds have increased over the years, diamonds continued to constitute around 49% of the bilateral trade in the year 2010. Besides diamond, the defence has also been important for both countries.

India is Israel’s biggest arms market, buying around $1 billion worth of weapons every year. However, India had cancelled $500 million order to Israel’s state-owned defence contractor Rafael for home-made anti-tank missiles, which Israel is confident of solving.

The list of MoUs/Agreements signed between India and Israel:

Israel will also invest $68.6 million to boost cooperation with India in areas like tourism, technology, agriculture and innovation over a period of four years. The commitment is in addition to the India-Israel Industrial R&D and Technological Innovation Fund of $40 million over five years.