An Introduction to West Bengal  Economy:-

West Bengal is situated in eastern India and shares its borders with Jharkhand, Bihar, Odisha, Sikkim and Assam. The state also shares international borders with Bangladesh, Bhutan and Nepal. The Bay of Bengal is in the south of the state. 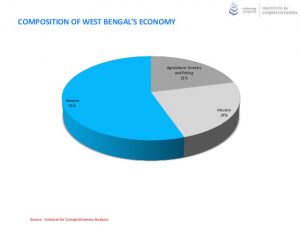 Agriculture dominates both the landscape and the economy of West Bengal. Its proportion of agricultural land is among the highest of all the Indian states. Rice, which requires extensive irrigation, is the leading crop in nearly every area. Indeed, despite its relatively small size, West Bengal produces a significant percentage of India’s rice harvest. Other major crops are sugarcane and oilseeds. Jute is especially prominent along the border with Bangladesh and south of the Ganges River. Mangoes, jackfruit, and bananas are widely produced in the southern and central portions of the state. Wheat and potatoes are produced as winter crops throughout the south. The northern areas around Darjiling and Jalpaiguri have long been known for their production of high-quality tea. The Darjiling region also produces oranges, apples, pineapples, ginger, and cardamom.

The state’s most important industrial belt is a corridor extending for a distance north and south of Kolkata, along the Hugli River. Another significant industrial region is located along the Damodar River. There are steel plants at Durgapur and Burnpur and a locomotive plant at Chittaranjan. Haldia, the terminus of an oil pipeline from Assam and the site of a large oil refinery, also has a petrochemical industry. Other important manufactures include ships, automobiles, chemicals and fertilizers, wagons, electronics, paper, jute, and cotton textiles. The state has a large number of small-scale and cottage industries as well. In the late 20th and early 21st centuries, the only mineral resources of West Bengal that sustained nationally significant exploitation were coal and clay for brickmaking.

The service sector has accounted for an increasing proportion of the state’s economy. Trade, finance, insurance, and related activities have grown significantly, and tourism has become increasingly important. Also experiencing growth has been the information technology sector. Kolkata is the financial centre for both the state and eastern India.