Integrity means that the moral agent acts according to the inner convictions of a person. His conducts should be free from hypocrisy and deception. His actions should be in conformity with his stated values. But it is hard to follow high morals which one proclaims. The British historian GM Trevelyan has commented on this aspect of Puritanism i.e. rigid pursuit of high morals: “by making a shibboleth of virtue, it (puritanical version of Christianity) bred notorious hypocrites”. But it doesn’t mean that one needs to abandon morals. One should be moral sincerely without making a show of it.

Public leaders who possess integrity create interpersonal trust. Integrity which refers to actions resulting from a set of well ordered commitments and beliefs promotes trusts. Trust implies the capacity to depend on and place confidence in the actions of others. All social interaction depends on integrity and trust. Integrity especially relevant in Public Administration in which cooperative, corroborative and collective efforts are needed to solve interconnected problems. Hence, character, particularly integrity, is essential in leaders and bureaucrats.

Ethics of integrity in contrast tries to impart to civil servants the necessary skills to analyze moral problems on their own. They are trained in areas like public service ethos, ethical standards and values and in the processes of ethical reasoning. By using such skills public servants will follow ethical norms in their conduct. Ethics of integrity leads to development of moral character with self responsibility and moral autonomy. It relies on internal, positive, proactive and voluntary efforts of public servants rather than on external commands and penalties.

Impartiality is a norm of justice holding that decisions should be based on objective standards, instead of on the basis of bias, prejudice, or preferring the advantage to one person over another for unsuitable reasons. Impartiality is acting solely according to the merits of the case and serving equally well governments of different political persuasions. Impartiality means that civil bureaucrats in carrying out their official work, including functions like 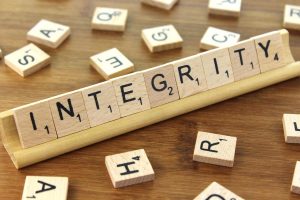 procurement, recruitment, delivery of services etc., should take decisions based on merit alone. Impartiality implies that the behavior of, and treatment by a bureaucrat to any individual or entity has to be exclusively on the basis of merit. An administrator has to take numerous major decisions such as recruitment, procurement and allotment. To make such decisions effective and efficient, there has to be absolute impartiality. Impartiality is the eminence of a person where one is impartial while allocating any goods or services among several people or selecting a person from a set of people based on certain set of abilities.

In Impartiality, candidates must: Perform his responsibilities in a way that is fair, just and equitable and reflects the Civil Service commitment to equality and diversity they must not act in a way that unjustifiably favors or discriminates against particular individuals or interests.

In political Impartiality, person must: Serve the government, whatever its political persuasion, to the best of his ability in a way which maintains political impartiality and is in line with the requirements of this code, no matter what your own political beliefs are.

Act in a way which deserves and retains the confidence of ministers, while at the same time ensuring that you will be able to establish the same relationship with those whom you may be required to serve in some future government.

Comply with any restrictions that have been laid down on your political actions.

Candidates must not act in a way that is determined by party political considerations, or use official resources for party political purposes and allow their personal political views to determine any advice they give or their actions

Non-partisanship strengthens the democratic procedures and institutions along with maintaining the integrity of the service. The administrators are always with continuous interface with the politicians, therefore it is necessary to detach themselves from any political dogma and do his duty sincerely. It does not matter which party is in power. Significance of non-partisanship can be appreciated by considering a situation in which this virtue is absent. If the administrator is motivated to any political party, there would always be a group that would remain alienated from the government services as they would have voted for losing party. It strongly fascinates other prerequisites of moral administration like clearness and trustworthiness.