The major horticulture produce comprises vegetables (86.4%). The State produces 23.04 m. MT of vegetables from an area of 1.38 m. ha. with the productivity of 16.7 t/ha.  Production of fruits comprises 10.9 % of total production of horticultural crops in the State. 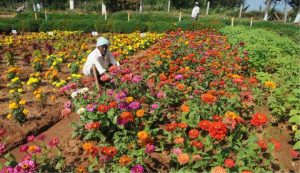 Initiatives undertaken by the West Bengal Government in these sectors in the last three years: