The soils of Bengal have been studied widely by different scholars. The studies carried out so far lead to the convenient grouping of soils as 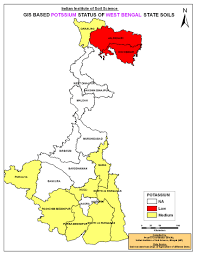 a.) Old alluvium: Comprising North and South Dinajpur and Malda districts. Soils are lighter in higher situations and heavier in lower situations, mildly acidic to neutral in reaction (pH 5.2 to 7.0); fairly fertile over most of the sub region; rainfall 1500-2000mm in upper and 1300-1500m in lower parts, considerable area is flood prone.

b.) New alluvium: Covering Murshidabad, Nadia, Hoogly, Burdwan and North 24 Parganas. Soils are deep, mostly neutral in reaction (pH 5.5 to 7.0) and fertile; rainfall 1350- 1450 mm; most productive area of the State.

The region covers Purulia district. Soils shallow modulated gravely, coarse textured, well drained with low water holding capacity. Upload soils are highly susceptible to erosion; acidic in reaction (pH 5.5 to 6.2). Rainfall varies from 1100 to 1400mm. which is spread over only three months, mid June to mid September. Due to high slopes of the hill region of the northern part of the State with high rainfall and cooler temperature round the year, this area is almost covered with forests, plantation and orchard crops. Only one third area of this region is being cultivated with crops. The crop productivity is poor due to high slopes, high rainfall and erosion, shallow and acidic nature of the soils. The region offers good scope for extension of cultivation of ginger, summer vegetables, peach, plum etc., adopting a sustainable approach.

The soils of Terai and Teesta region are light textured, strongly acidic due to high rainfall. Rice, jute and tobacco are the major kharif crops of this region, while in winter a number of winter vegetable crops, potato and a few pulses and oilseed crops are being grown with poor productivity. This agro-climatic region is also suitable for extension of cultivation of wheat, potato, groundnut, superfine & scented rice, high value spices like black pepper, cinnamon, ginger, turmeric, garlic etc. Cultivation of medicinal and aromatic plants and allied sectors like animal husbandry and fisheries are other potential areas for further development. The development of agriculture rests in the timely supply of good quality seeds and propagation materials of good varieties with a developed marketing channel. Small & marginal farmers of North Bengal also have tradition for large scale cultivation of winter vegetables. However, they do not get adequate remunerative price for want of easy and cheap transport system, strong marketing system, cold storages and agro-processing units. This region is located at the centre of the eastern region of India and strategically positioned with three international frontiers- Bangladesh, Nepal and Bhutan and also borders the States of Jharkhand, Bihar, Orissa, Sikim and Assam. As a matter of fact, there are good prospects for agro-processing units for primary processing of vegetables, fruits and spices and at the same time bringing them in a semi-processed condition or secondary processed material with backward linkages to small rural centers.

West Bengal has by far the largest alluvial land, being 35 lakh ha in the country of which 22 lakh ha comes under Vindhya and Gangetic alluvial soil regions. These are endowed with neutral to near neutral, deep and fertile soils with high water holding capacity. The areas have advantage of river valley irrigation as also ground water potentials. A wide range of wet and dry season field crops, vegetables, fruits and spices are being grown with around 200% cropping intensity. Yet the productivity levels of a majority of the crops are below the potential levels mainly on account of low input and technology application influenced by poor economic status of the farmers and their limited access to institutional credit. These two regions have great promise for large scale cultivation of a variety of winter and rainy season vegetables as well as flowers. Notwithstanding the fact that mango, litchi, guava and banana are the prosperous fruit crops of these regions, the old mango orchards in Malda and Murshidabad districts have outlived their economic life and need replacement and/or rejuvenation. Common facilities like uninterrupted power supply, good quality water supply, cold-chain facilities, warehousing facilities, forward integration with processing industry are the interventions required for further development of the sectors in the region.

In the western belt of West Bengal there exists a vast tract relatively arid where the lands are lateritic and undulating. Such lands represent about one third of the cultivated area in the districts of Purulia, Bankura, parts of Paschim Medinipur, Bardhaman and Birbhum. Uplands of varying sizes, from a few hectares to a few square kilometers, are interspersed with terraced rice fields in the depressions and on the slopes. The bottom terraces where moderate yields of rice are obtained, generally belong to a few comparatively better-off farmers. The majority of the inhabitants of this region are predominantly tribals and other backward communities. They have largely depended on these marginal uplands where they attempt to grow some hardy varieties of poor yielding rice, certain small millets, a minor pulse-horse gram and a minor oilseed-niger; to eke out a living. Except in the year of good rainfall, the yields are very poor, hardly compensating for the labour and other inputs. In spite of this, however, more and more such uplands are being brought under plough due to pressure of rising population. The nutritional status is poor partly due to leaching losses on account of high soil porosity. The productivity of the soils in the region could be improved substantially through adoption of interventions like selection of suitable crop varieties, management of soil, adoption of water harvesting and soil conservation techniques, manuring, adjustment of sowing time, etc.

The southern most areas of West Bengal in the districts of South 24-Parganas, Purba Medinipur and southern Howrah are low lying and level part of the deltas of the river system of the Ganga on the northern coast of the Bay of Bengal. The rice fields are classified as medium low and low lands which are inundated by floods and rain water with poor drainage. Water stagnates throughout the monsoon period to a level of 30 to 60 cm. The vast tracts of coastal saline soils occur on the fringes of Bay of Bengal. Underground water table is present at a shallow depth with high salt content. Salts are raised to the surface during the dry periods of the year rendering it unfit for cultivation of many crops needed by the local people. These areas extend to 8.4 lakh ha. Only 4% of the cultivated area is irrigated with sweet water. The region is, therefore, a mono-cropped area with 4.2 lakh ha being cultivated area in the wet season and the rest six to seven months during winter and summer remain generally fallow. Of course, a few enthusiastic farmers in the less saline areas have adopted commercial cultivation of chilli and watermelon adjacent to their homestead. Possibilities of extension of sunflower, groundnut and cotton cultivation providing saline water (Ec 5.2 dS/m) irrigation, have been reported. During the Kharif season, this tract receives about 1600 mm rains between June to October. This amount of water is far in excess of that required for Kharif crops. The proven technique of storing the excess rain water in 1/5th excavated land of the total cultivated land of a farmer and raising the adjacent embankment and crop field (Bhattacharya,1990 and RKMLSP) is strongly suggested for large scale adoption. This technique would surely bring in prosperity with the cultivation of fruits and vegetables on pond embankment and diverse field crops both in Kharif and Rabi seasons on the raised fields and pisci-culture amongst the small and marginal farming communities of this agro climatic region.