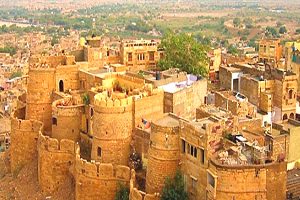 Rajasthan is the largest state of India in terms of area covered. Covering most of the Great Indian Desert, Rajasthan has emerged to be one of the leading international tourist destinations of the world. Tourists and travellers form various parts of India and from different parts of the world visit Rajasthan throughout the year. A culturally and traditionally rich state of India, Rajasthan comprise cities, towns and villages. There are a number of cities in Rajasthan which reflect the true essence of Rajasthan.

It is part of the Golden Triangle for tourists visiting India. Endowed with natural beauty and a great history, Rajasthan has a flourishing tourism industry. The palaces of Jaipur, lakes of Udaipur, and desert forts of Jodhpur, Bikaner & Jaisalmer are among the most preferred destinations of many tourists, Indian and foreign. Tourism accounts for eight percent of the state’s domestic product. Many old and neglected palaces and forts have been converted into heritage hotels. Tourism has increased employment in the hospitality sector. The main sweet of the state is ghewar.

Rajasthan is known for its historical hill forts & palaces, it is claimed as best place for tourism related to palaces. Following are some of major palaces in Rajasthan.

The capital of Rajasthan, Jaipur is a place you can plan for a weekend leisure trip from Bharatpur, Agra or Delhi. Be it the monuments or the palaces, the variety of foods or shopping destinations, everything is great about this city. You will be able to get the royal feeling even today as you enter the city.

Also known as the ‘Venice of the East’, Udaipur used to be the capital of Sisodiya Rajputs of Mewar. The palaces still look regally good and the Rajputana style of architecture is dominant. The city is located in the foothills of the Aravali mountains. There are many palaces, forts, temples and market places in the city which are counted as the tourist attractions of the city. The city is planned, and its people very hospitable.

Jodhpur is the largest and second most populated city of Rajasthan. The other name of Jodhpur is the ‘Sun City’ for the sunny weather it has. The main attractions of the city are forts, palaces and the walled old city. Famous for architecture & blue homes giving the name “Blue City”

The other name of Jaisalmer is the ‘Golden City’. It is located in the heart of Thar Desert. The feature that makes the city unique is its architecture. In fact, the city itself is one of the largest forts in the world as it is completely walled. The top attractions of this city are Jaisalmer Fort, Bada Bagh, Patwon-ki-Haveli, Sam Sand Dunes, the Thar Heritage Museum, Gadisar Lake, Desert Nation Park and Silk Route Art Gallery.

Popular for forts and food, Bikaner has also something which is very unique and it’s the windowpanes called “jharokhas”. People who are fond of food and want to tickle their taste buds with authentic taste of Rajasthani food must visit Bikaner. Apart from the food and forts, the temples of the city are equally notable.

When people get to hear the name of this city, the first thing that comes to their mind is that of the annual camel festival. The camel festival in Pushkar runs for five days, where people sell and buy livestock. However, that is not the only asset the city has; it is also known for being the holy city and the only temple of Lord Brahma in the world is in Pushkar itself. It is said that the Pushkar Lake was formed by the tears of Lord Shiva.

Chittorgarh was once the capital of Mewar and birthplace of many historical figures such as the great Maharana Pratap and Hindu saint, Meera Bai. There are many temples, forts and palaces in the city which 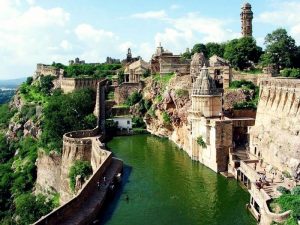 boast extraordinary architectural designs and artistic mastery. One of the famous attractions of Chittorgarh is the Chittorgarh Fort, which is considered as the largest fort in India.

Other Important cities and places

The fort was the capital of Mewar and is today situated in the Chittorgarh town. It sprawls over a hill 180 m (590.6 ft) in height spread over an area of 280 ha (691.9 acres) above the plains of the valley drained by the Berach River.

Kumbhalgarh (“Kumbhal fort”) is a Mewar fortress on the westerly range of Aravalli Hills, in the Rajsamand district near Udaipur of Rajasthan state in western India. It is a World Heritage Site included in Hill Forts of Rajasthan. Built during the course of the 15th century by Rana Kumbha, Kumbhalgarh is also the birthplace of Maharana Pratap, the great king and warrior of Mewar. With a wall over 38 km long, the fort is among the largest wall complex in the world, and the second largest fort in Rajasthan after Chittor Fort.

Ranthambore Fort lies within the Ranthambore National Park, near the town of Sawai Madhopur, the park being the former hunting grounds of the Maharajahs of Jaipur until the time of India’s Independence. It is a formidable fort having been a focal point of the historical developments of Rajasthan. The fort is known for the glory and valor of Hammir dev of the Chauhan dynasty.

Gagron Fort is situated in Jhalawar district of Rajasthan, in the Hadoti region of India. It is an example of a hill and water fort.

Amer Fort is a fort located in Amer, Rajasthan, India. Amer is a town with an area of 4 square kilometres (1.5 sq mi) located 11 kilometres (6.8 mi) from Jaipur, the capital of Rajasthan. Located high on a hill, it is the principal tourist attraction in the Jaipur area. The town of Amer was originally built by Meenas, and later it was ruled by Raja Man Singh I. This palace, along with Jaigarh Fort, is located immediately above on the Cheel ka Teela (Hill of Eagles) of the same Aravalli range of hills. The palace and Jaigarh Fort are considered one complex, as the two are connected by a subterranean passage.

Jaisalmer Fort is one of the largest fully preserved fortified cities in the world. It is situated in the city of Jaisalmer, in the Indian state of Rajasthan. It is a World Heritage Site. It was built in 1156 AD by the Rajput ruler Rawal Jaisal, from whom it derives its name. The fort stands amidst the sandy expanse of the great Thar Desert, on Trikuta Hill. Before the days of the British Raj, the fortress city served as a refuge and way-station for caravans and travelers along the Silk Road.

The fort’s massive yellow sandstone walls are a tawny lion colour during the day, fading to honey-gold as the sun sets, thereby camouflaging the fort in the yellow desert. For this reason, it is also known as the Sonar Quila or Golden Fort.

Nahargarh Fort stands on the edge of the Aravalli Hills, overlooking the city of Jaipur in the Indian state of Rajasthan. Along with Amer Fort and Jaigarh Fort, Nahargarh once formed a strong defense ring for the city. The fort was originally named Sudarshangarh, but it became known as Nahargarh, which means ‘abode of tigers’. The popular belief is that Nahar here stands for Nahar Singh Bhomia, whose spirit haunted the place and obstructed construction of the fort. Nahar’s spirit was pacified by building a temple in his memory within the fort, which thus became known by his name. Built mainly in 1734 by Maharaja Sawai Jai Singh II, the founder of Jaipur, the fort was constructed as a place of retreat on the summit of the ridge above the city.

The Bhatner fort is at Hanumangarh in Rajasthan, India, about 419 km northwest of Jaipur along the old Multan-Delhi route and 230 km north-east of Bikaner. The old name of Hanumangarh was Bhatner, which means “fortress of the Bhatti Rajputs”.Believed to be 1700 years old, it is considered to be one of the oldest forts of India

Junagarh Fort is a fort in the city of Bikaner, Rajasthan, India. The fort was originally called Chintamani and was renamed Junagarh or “Old Fort” in the early 20th century when the ruling family moved to Lalgarh Palace outside the fort limits. It is one of the few major forts in Rajasthan which is not built on a hilltop. The modern city of Bikaner has developed around the fort. The fort complex was built under the supervision of Karan Chand, the Prime Minister of Raja Rai Singh, the sixth ruler of Bikaner, who ruled from 1571 to 1611 AD.

Mehrangarh (Mehran Fort), located in Jodhpur, Rajasthan, is one of the largest forts in India. Built around 1460 by Rao Jodha, the fort is situated 410 feet (125 m) above the city and is enclosed by imposing thick walls. Inside its boundaries there are several palaces known for their intricate carvings and expansive courtyards. There are seven gates, which include Jayapol (meaning ‘victory’), built by Maharaja Man Singh to commemorate his victories over Jaipur, Udaipur and Bikaner armies. Fattehpol (also meaning ‘victory’) gate was built by Maharaja Ajit Singh to mark the defeat of the Mughals.

Lohagarh Fort (Iron fort) is situated at Bharatpur in Rajasthan, India. It was constructed by Bharatpur Jat rulers. Maharaja Suraj Mal used all his power and wealth to a good cause, and built numerous forts and palaces across his kingdom, one of them being the Lohagarh Fort (Iron fort), which was one of the strongest ever built in Indian history. The inaccessible Lohagarh fort could withstand repeated attacks of British forces led by Lord Lake in 1805 when they laid siege for over six weeks. Of the two gates in the fort, one in the north is known as Ashtdhaatu (eight metalled) gate while the one facing the south is called Chowburja (four-pillared) gate.

Taragarh Fort or ‘Star Fort’ is the most impressive of structures of city of Ajmer in Indian state of Rajasthan. A rather ramshackle fort, with its overgrown vegetation, It was constructed in 1354 upon a steep hillside. There are three gateways to the fort, well known as Lakshmi Pol, Phuta Darwaza and Gagudi ki Phatak.

Jalore Fort is the main attraction of Jalore, a town in the Indian state of Rajasthan, one of the nine castles of the Maru, under the Paramaras in the 10th century. It is one of the most famous and impressive forts in the state and has been known through history as the Sonagir or the ‘golden mount’.

Jalore Fort is regarded as one of the most impregnable forts of the country. There is a saying: Let the sky be torn, the earth turned upside down, let the iron armor be cut to pieces, body fighting alone, but Jalore would not surrender.

Nagaur (Nāgaur) is a city in the state of Rajasthan in India. It is the administrative headquarters of Nagaur District. The Nagaur city lies about midway between Jodhpur and Bikaner.